Life is all around/ digesting the debris
from moon-belly,  diagram of decorative spines
seed-vessels, pinked

A similar species furnishes space
a small, narrow stem     of the fringed polygala

[ in its laborious year]

star torn from its bodice -------   I appear mad and invigorated

open up between slits of skin

she is a dream in the voice-box, awakened

--I appear, my eyes, nectar pouring out
of each ripe orifice

stroke the air and its bulbous vacuums

All I think about is obliterating the bay,
any bay,      waving poems and bellowing   ----- where God
is a sensation of white noise and youth-spunk

[we become photos of her most unphotogenic moments]

Ariel enjoys talk of planets in retrograde, women coming late
or not coming at all      succulents in their late withering states,
once healthy children bursting with consumption


----to Ariel, their suffering is like an inaccessible breast

she longs for the painful music within it

Medusa stopped him dead, so why can’t I?
This poem fits like a glove, the old cliche
I depart where my line ends; I am not endless


little tremors around the mouth

[     it is a thousand degrees
where my heart rests


[   where one comes scourged and sweet on the gums,
as unforgivable as God or bad sex ]

the ruts are extra dangerous, shows skin-moves,
sin after poems   ---- /doctor, I rubbed it until it slid
leaving jagged pieces of myself

here is the bad blood      [ of a pulverized flower


///the untouched area between coccyx and navel///

Ariel doubts this, too
Posted by Matina L. Stamatakis at 8:10 AM No comments:

How many of you are you nakedly? How many of you
from the gutters emerge like a silk-drenched pearl
from a beggar’s mouth? He’s seafaring, gone
every six months, but still manages to stare back
at you with fishy eyes. Loose slickers & a bit of scurvy on the lips.
You’re a little bit of a rash if you know it. Good for you, or bad
depending on the weather. Nothing can reshape your mouth
to do better than a noose—all up in it, tight-lipped.

Dew is a mercy of the morning! Scarlet wet with blazing intentions.
A buxom bold. A hold of ecstatic tongues—you come scourged
& sweet on the gums. I fashion you into my skin like a salve as you divulge
the deepest secrets, claim the locusts swallowed
your lover’s bones as you fished your rippled face out of a river.
You say you were l’inconnue de la Seine in your past life.
A jawbone the shape of a cliff, as you waited for Him
to harness your endless body.

Portrait of a Gemini (analog collage) 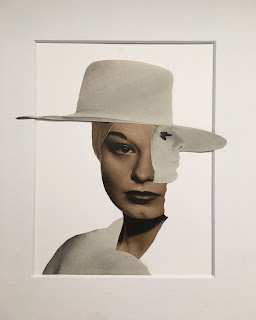 Posted by Matina L. Stamatakis at 10:46 AM No comments:

Call it “flesh vessel”, oil forming
rings around the stomach
of her papoose, a rind of thick skin
heaven knows it holds together so
what  mouth knows to be soft
fruit, a tang, fur-lined olive
a fistful
of holly in a sea of moths
─the exact moment light bends
into phosphor & slow decay


I think She, or Radiant Hummingbird
her intense sun, prays to thickets
of pulse trapped in the blood
of Mayan gods—she stretches
her breasts to meet the tongue
earth shaking between the knees

Call it “honey temper”, simmering
in her saliva, ointment or salve for
mosquitoes—all utterances slick
with hum her vulvae spreading
to receive flowers
Posted by Matina L. Stamatakis at 6:17 AM 12 comments:

to make these lips more desirable/ what stirs the vocabulary


dust leaves behind?/ or venous geography of our air sacs/ or


or death as personification of a vigilante/ O' bird/ you've gone

and done it now/ these lips pull back/ laugh bird-struck

Matina L. Stamatakis
[forget the body’s response to Death, forget the heavy breath & desire for longevity--all a whisper claims is air----- not infinity]